Swiss artist, born in 1980, graduated in 2013, with special mention for her thesis, at ECAV in the MAPS program - Master of Arts in Public Spheres - she also graduated with honors in 2006 from the High School of Art and Geneva (HEAD), in the visual arts section. She did a six-month exchange at the National School of Fine Arts in Paris (ENSBA) in 2005.

She won the Lausanne Foundation Prize for Contemporary Art in 2011 and the ECAV alumni edition prize in 2013. She has been an active member of Visarte since 2012.

The work of the artist is centered around the theme of women in a representation in bust since the waist, naked and in determined positions that are repeated. By decorating them with animal heads or parts of animals, the idea that one has of the animal will thus determine the kind of personage represented.

Her work has been the subject of numerous publications, notably at: Art & Fiction in Lausanne L'Eclosoir, in Thonon-Les-Bains (France) Ripopée, Nyon Couleurs d'encre, Lausanne. 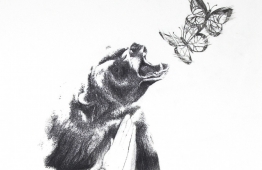