Sylvie Mermoud and Pierre Bonard. Two names for a title, two artists for a work ... Actually, to draw "four hands" is still, despite everything, draw with both hands, even if that, we imagine, commits two beings in their own right. At Mermoud & Bonard, alternation prevails. And even if one or the other is alone in the exercise, at a given moment, it is necessary to note the very great attentiveness within this couple of the sinant: each preparing the ground of the other, anxious to avoid any overlapping of features. It is thus in the elaboration of composition that the purely collaborative nature of the work is played out. And in this game of crossover, we really think of a dance ... It is not really a ballroom dance that inspire us these drawings. The universe in which Mermoud & Bonard evolves - from mineral to plant, from threatening to soothing, from fluid to rough, from soft to rigid, from dark to bright, from burlesque to tragic - from the death drive to the drive of life, say the Freudians, all this waltzes our eyes. Here we are in the hollow of a dance at once macabre and joyous. I call it "a tango on the edge of the precipice". Christian Pellet (Editions art and fiction) - November 2018

Graduated from the School of Visual Arts (ESAV) in 1982 in Geneva, she lives and works in Lausanne. Sylvie Mermoud creates microcosms from the mineral, plant and animal kingdoms. Her drawings evoke a world of curious living while remaining strangely close to us. Constantly moving, imbued with an almost magnetic energy, it is a strong language, personal, supremely mastered.

After training as art restorer in the early 1980s, he opened his art restoration workshop in La Sarraz. He took over the management of Espace Palud N ° 1 from 1985 to 1990 and organized several exhibitions as an independent curator. He has been president of Visarte Vaud since 2014. He plays with our senses not without humor, he amuses himself to put us in riddles his works. These, however disarmingly simple, are all more complex because the artist leaves doubt over their meaning, inviting the imagination of the viewer to appropriate them. 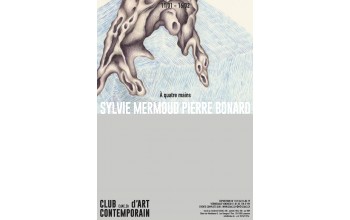