Carmen Perrin was born in 1953 in La Paz, Bolivia. In 1960, her parents decided to go into exile with her family in Switzerland, from where the father came from his father. In the city of Calvin, Carmen Perrin did all her primary and secondary schooling as well as her artistic studies. In 1981, she graduated from the École Supérieure des Beaux Arts in Geneva (currently HEAD). In 1980, she taught drawing first at the middle school of Cayla and then in art section at the College de Saussure. In 1986 she began a teaching that will last 12 years at the School of Fine Arts in Geneva (HEAD). During the same year, she participated in an exhibition at the Cantini Museum in Marseille and settled there to live and work for 8 years.

In 1993 she received a scholarship from the Landys and Gyr Foundation which allowed her to live and work in a studio for two years in London. Currently she lives and works in Geneva and regularly holds a workshop in France.

Since the 1980s, Carmen Perrin has emerged as a visual artist who creates sculptures. Since the 90s, she began to work in closer and closer relation in architectural and landscape contexts. She creates works that articulate relationships between materials, light, spatial and perceptual experiences, architectural qualities and social realities in the public space.

In 2005, she decided to interrupt her teaching practice to devote herself entirely to her artistic research. In 2011 she received a second scholarship from the Landys and Gyr Foundation for a six month residency in Berlin. In 2015 she received the Cultural Prize from the Leenaards Foundation. Currently she works on projects related to public space in Europe and South America and leads, in the studio, a research that closely articulates the practice of sculpture and drawing. 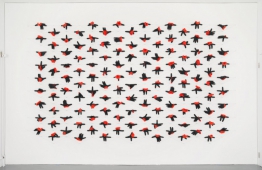