Pierre Bonard was born in 1956 in Lausanne. He pursued a training as art restorer at Pierre Boissonnas in Zurich. After his studies, he opened in 1984 his art restoration workshop. From 1985 to 1990, he managed the Espace Palud N ° 1 in Lausanne and, from 1990 to 2000, he organized several exhibitions as an independent curator such as the Château de la Sarraz or the Arlaud space in Lausanne. In 2007, he began to work on painting and drawing.

He has exhibited in various places such as the Forma gallery and the ESF space in Lausanne, Halle Nord in Geneva and la ferme de la Chapelle in four hands with Sylvie Mermoud. He also participated in the performance procession organized by the collective RATS during the festival Images in 2010, as well as the exhibition The Room designed by this collective in the building of the former EPA in Vevey.

Since 2014, he is president of Visarte.Vaud. His work is based on incongruous associations and drawings full of poetry. Playing with our senses not without humor, Pierre Bonard is entertained to put us in riddles his works. These, however disarmingly simple, are all more complex because the artist leaves the doubt on their meaning, inviting the imagination of the viewer to appropriate them. 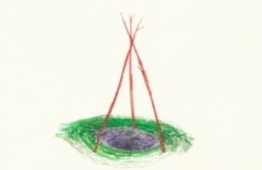