Philippe Fretz was born in 1969 in Geneva. He graduated from ESAV (current University of Art and Design) in 1992 and received the Stravinksy Prize the same year. He benefited from three Kiefer-Hablitzel Scholarships between 1996 and 1999 and worked in Marseille during this period. He was awarded the Bailly grant in 2002 and was awarded by the city of Geneva a Grütli workshop for two years. He gets a Werkbeitrag from the Aargau Kuratorium in 2014 and 2017

He has been collaborating with Art&fiction editions since 2000 and was president of the Kugler Federation of Artists between 2009 and 2012. Since 2009, he has been teaching for one month every month a course entitled "Narrative painting" at Gordon College in Orvieto. Italy.

He also produces and publishes a bi-annual artist's magazine titled "In medias res" which confronts his paintings with personal iconography. 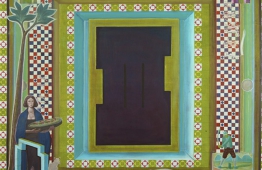