Qiu Ji was born in 1961 in Shanghai. Graduated from Shanghai Fine Arts in 1981, he pursued a career of designer and decorator on behalf of a state company. At the art department of Shanghai University, he learns to draw in a realism style, official artistic movement of the time. In 1985, he presents his first solo exhibition at the Xu Hui Palace of Culture. He moved to Switzerland in 1989 and graduated in Multimedia at the School of Fine Arts in Geneva in 1995. The Cultural Revolution marked Qiu Jie, he reproduced propaganda images from local newspapers. His art draws on Chinese history socialist propaganda, confronted with Western culture.

He has won several prizes, including the first prize in the Visual Arts of the Geneva Competition (1994), the Federal Prize for Fine Arts, Geneva (1995), a grant for his studio awarded by the City of Geneva (1996), the scholarship Simon I. Patino awarded by La Cité des Arts, Paris (1995). 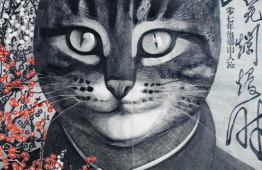