Romain Mader was born in 1988 in Aigle and currently lives in Zurich. He obtained a Bachelor's degree in Photography at the ECAL (Cantonal Art School of Lausanne) in 2012. He began the series "Ekaterina" in 2009 and presented it in 2013 at a solo exhibition at Espace Quai 1 in Vevey. It tells the fictional story of a romantic encounter in the imaginary city of Ekaterina, Ukraine.

Between reality and fiction, this true-false documentary puts him in the quest for a woman to marry. Ironic and naïve speech, his work mixes video, photographs and text. In most of his works, his favorite themes remain loneliness, a social gap and maladjustment to the sometimes absurd codes of modernity.

He won the Paul Huf Award in 2017 which rewards the work of a photographer under 35 years old. 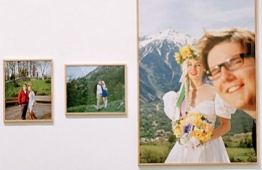