He is considered an important representative of the Art Relational, contemporary artistic movement, appeared in France in the 90s. The sphere of interpersonal relations and works "specific to the site" constitute one of the main artistic stakes of the 90s where Raoul Marek is a precursor.

In 1993, he created "La Salle du Monde" for the Château d'Oiron in Deux-Sèvres, a table service made in collaboration with the Cité de Céramique in Sèvres. On June 30 of each year, the table service is out and a random community of 150 people from Oiron (and its guests) is invited to dinner at the castle. Since then, this day has become a tradition that is organized annually. He also recreated the table service in Bern, Switzerland on September 3, where the same principle continues. "La Salle du Monde", a project of artistic networks since 1993 in France and Switzerland thematizes issues around globalization and different cultures where artistic creation is thought of as a communicative moment of sharing awakening all our senses. 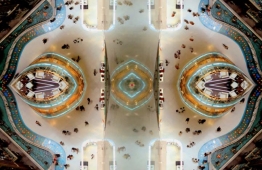