Manuel Müller, born in 1955 in Paris, is a Franco-Swiss sculptor and engraver. In 1972, he discovered engraving by doing an internship at the Clot and Bramsen workshop in Paris before settling in Carrara until 1976 to learn how to work marble. Back in France, he began to carve the wood that will become his favorite material. He moved to Lausanne in 1982 and continues to develop his sculptural practice.

His work was awarded the UBS Sculpture Prize in 1987 and the Bourdelle Prize in Paris in 1993. The Jenisch Museum in Vevey is organizing a retrospective in 2001 and his works are regularly presented at the Bex Sculpture Triennale, in Basel, Lausanne and France. 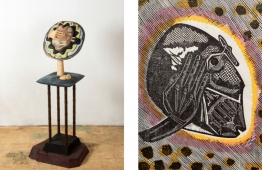