For the "Linear narratives" exhibition at the CdAC, Naomi Middelmann introduces us to a new collection of works around the theme of memory and the story that human beings make of it. The artist's questions lead her to highlight the different moments of our life. A new way to create a narrative line that varies depending on the context.
Through this series, the artist has chosen to explore the material in all its
fragility, transparency and lightness.

"We now know that our memories are not rigid or fixed things, but are things that are transformed, deconstructed, and collected, each time we try to remember something." 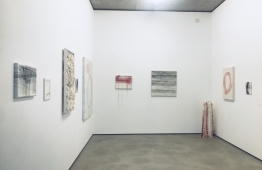