Beginning with a digital image or personal photography, which he simplifies the motive, Marco De Francesco transforms it by binarizing colors into an agglomerate of pixel points. Everything becomes black and white, so he gets a new image without any alternative. These shapes of different sizes give to see some kinds of archipelagos. Then black becomes color from its "earth" palette generating what looks like the sketch of a map with monochrome expanses. With his hand, he places a black line in Indian ink on the image choosing the territory to be circumscribed, the forms to emphasize and the message to be passed in a silent calligraphy. Each painting can therefore be considered as part of a patchwork under construction. Marco De Francesco is a digital craftsman sensitive to the history of humanity. He looks at our world through time, history, science and society looking at societal and topical issues. His approach visually portrays the roughness of our life. During this exhibition, he presents a set with multiple themes, restoring his wonders and destruction, through narrative sequences where each table finds its temporary place, while being linked to the next. Everyone will find his thread: the meaning, the line, the time ... The elements of this composition thus embroider an ephemeral story put on the wall at a given moment but it is possible to rewrite. Through this constant graphic universe, he shows us the depth of his work and his questions.

The exhibition will be accompanied by a poetic soundtrack made especially by Shin Iglesias.

Press release on the exhibition 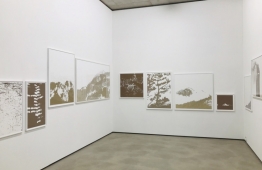