Saturdays from 14:00 to 18:00
The artist will be present on Saturdays. Exceptionally due to the current covid situation, the space will be open on Saturday afternoons only and will comply with current health regulations. Private visits are possible by appointment at other times during the week.

Contextual memory
In this new series, Naomi Middelmann continues her exploration of memory and migration. Interested in juxtaposing media, techniques and elements, she explores the subjectivity of memory and of perception. More specifically, she is interested in how memories are transformed and reivented according to time and context.

This second solo show of the artist at CdAC follows her first one in 2018. For several years, CdAC has been carrying and following the migration of Naomi Middelmann’s work.

The artist first «offered» to a group of participants in a workshop at the CdAC in 2017, a large canvas entitled «migration». This work, which had already been exhibited in a museum, was transformed into a collective work that the artist then named «unfinished, finished». The artist chose to experiment and question the impact of the public on the work of art. In continuation, her research did not end there, she has again transformed this creation into a series of multiple works named «You can never go home» that we can discover today, among other new paintings and drawings.

Naomi Middelmann
Born in Switzerland, she moved to New York as a teenager. After earning a Bachelor’s degree in Creative Writing and International Relations from the prestigious Johns Hopkins University, she launched a publishing house with a friend in New York. Upon her return to Switzerland, she obtained a postgraduate degree in visual arts from the Visual Art School in Basel in 2009.

Since then, his work has been presented in more than 50 exhibitions in galleries and art fairs in Europe, Switzerland and USA as well as in private and public collections. She is a member of Visarté Vaud. She conducts numerous conferences and discussions around her artistic research and collaborates with neuroscientists at leading universities. 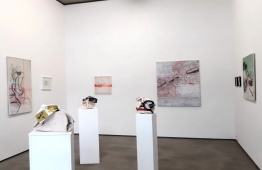