LES GARAGES CONNECT TO THE QUARTIER DU FLON.
Appointment on Thursday September 28 at 5.30 pm for the inauguration of the Garages.

Participatory performance of Cedric Bregnard from 5.30 pm to 7.30 pm in the street on a photographic image of "Metropolis".

The photographer Cédric Bregnard offers images to revivify together.

Through his participative performances, he guides the imprint of a collective memory.

The protocol is as follows:

A mural printed on wallpaper, thus offered to the public, it is transformed into a polyphonic drawing in India ink activated by dozens of different hands.


Once the collective drawing is finished, Cédric Bregnard takes a picture of the big drawing, the image then returns to the image, a facsimile testimony of the past moment.

Each place calls for a different image, and each performance creates the possibility of a different collective, created ex nihilo and expressly. The result is a quality of vibrations - as can be seen in the image of Oak or Larch below - which depends on the consciousness, the encounters and the intentions that are lived within the moment.

At the end, each participant is photographed near the part he has drawn as the witness of his participation.

For Flon garages, Cédric Bregnard has thought of using an iconic image of silent cinema taken from Fritz Lang's film.

The Flon being a knot combining tradition and modernity even future, simultaneous contrasts, experimental urbanism to industrial buildings of the late nineteenth, the reference to Metropolis (not far from the room Metropole) appeared relevant.
text by Florence Grivel 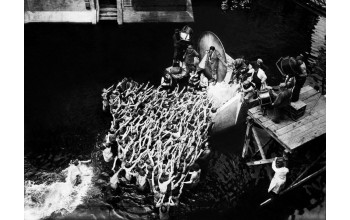