For the "Linear narratives" exhibition at the CdAC, Naomi Middelmann introduces us to a new collection of works around the theme of memory and the story that human beings make of it. The artist's questions lead her to highlight the different moments of our life. A new way to create a narrative line that varies depending on the context. Through this series, the artist has chosen to explore the material in all its fragility, transparency and lightness.

Naomi Middelmann is interested in exploring and exploiting traditional / non-traditional artistic materials and techniques, in a desire to experiment with their possibilities to use and reuse elements of her environment. It seeks to deepen the question of identity by recovering, transforming, assembling and disassembling materials related to the human being. 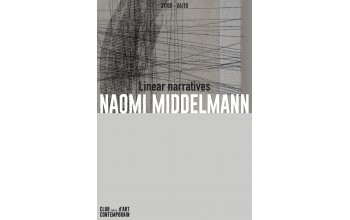