Opening on Friday, February 7 from 5 to 7 pm

At a time when visual art relies on words to clarify its message, Manuel Müller remains a rebel, an activist of form. He refuses to let written language reveal the meaning of his works, preferring the more cryptic but also more authentic, of the image itself. His discourse revolves around the forms which he assembles and arranges to create symbolism. Anatomical and animal elements are mixed together in an abundant colourful environment, forming a formal discourse in which the spectator is left as the sole interpreter. The work does not need subtitles, preferring the universal language of myth and phantasmagoria. This silent discourse of forms offers to the attentive spectator as many parables and metaphors, made to speak to the body and the heart.

This exhibition by Manuel Müller reveals his carving work through sculptures and engravings on
hand-pulled woods.

From a text by Ermenegilda Müller 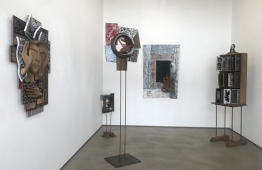