The CdAC is pleased to invite you to the participative performance of Naomi Middelmann which will focus on the meeting of the organic with the plastic during the artistic course of the Flon District "La Ligne Bleue".

At first, the public will participate in the creation of a work questioning the recycling of elements from our daily life to face the waste. Adults and children will be able to add and experiment with mixtures of natural and synthetic ingredients, all in recycled plastic cups from the artist's studio. A chemical reaction and time will transform this mixture that will be reworked by the artist. In a second time, the artist will make an installation resulting from this performance during her next exhibition at the CdAC in September 2018.

Naomi Middelmann is interested in exploring and exploiting traditional / non-traditional artistic materials and techniques, in a desire to experiment with their possibilities to use and reuse elements of her environment. It seeks to deepen the question of identity by recovering, transforming, assembling and disassembling materials related to the human being. 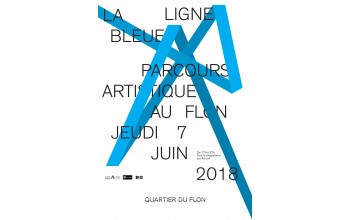